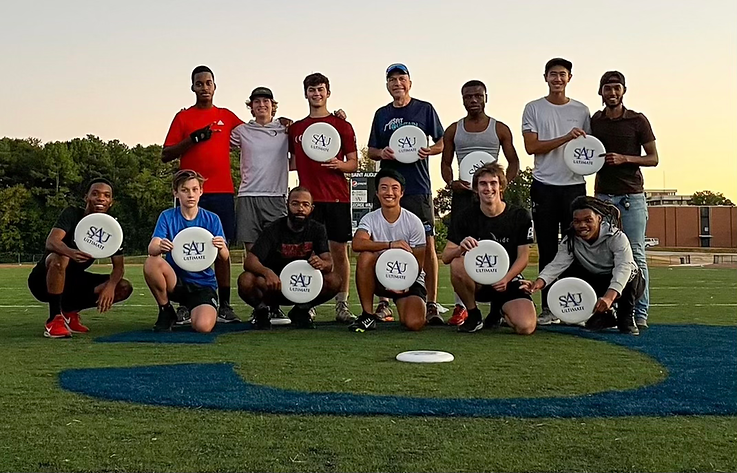 September 24, 2022 – Raleigh, NC:   One of the nation’s premier collegiate Ultimate programs visited the SAU campus for the first of several planned joint workouts this Fall. The University of North Carolina Ultimate team has won the past two national collegiate Ultimate championships, but the team, known as the Darkside, wants to further develop the sport both on and off the field.
“SAU has started the first HBCU Ultimate team in the country. That’s an important development for the sport, and our squad wants to be there as much as we can to help the program,” says Max Goetz, UNC Darkside officer.
That help will be in the form of joint practices, coaching consultations, and other cooperation in regional collegiate Ultimate activities and events.
“We live in the unofficial ‘Ultimate capital’ of the country.  Some of the top collegiate programs in the country are here, and we even have two professional teams,” adds SAU professor and team advisor, Mark Janas. “The Ultimate community, including groups such as Triangle Ultimate as well as the UNC team, have really stepped up to support what SAU is trying to accomplish, and we’re very appreciative.”
SAU has scheduled a showcase match with UNC in late October 2022.  Details are forthcoming.  For more information and updates, visit:  https://www.sauclubsports.com/ultimate.
Previous Article Next Article